Home › The mystery of the workhouse baby

The mystery of the workhouse baby 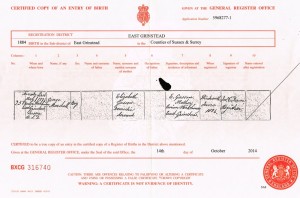 The envelope contained a copy of the birth certificate of the first-born child of my great grandmother Elizabeth Coomber, nee Gasson, and instead of sorting out the mysteries surrounding this boy, it complicated them even more.

Elizabeth is a key figure in my family tree. She was the much loved grandmother who raised my father and about whom he always spoke with great tenderness and admiration; the mother of eight children of her own, six of whom survived to adulthood; the housewife who supplemented the family income by taking in washing when the only mechanical aids were a ‘copper’ to heat the water and a mangle to help the drying process; and the woman who acted as the unofficial midwife in the village for women who could not afford to call the doctor.

Elizabeth’s first child was born seven months before she married my great grandfather, Thomas Marshall Coomber, and I’d been hoping that the certificate would confirm whether or not Thomas was the father. But it didn’t.

The baby’s name, according to registrar John Dawe on 13 June 1884, was George Marshall; no father is given; the mother is Elizabeth Gasson, Domestic Servant and she was living at the Union Workhouse, East Grinstead.

Three years before, aged 16, she had been living with her parents at Bolebrook Cottage, Hartfield. She presumably started work soon after that and as a domestic servant, she is likely to have lived in. But her employers wouldn’t have wanted the upheaval of a baby.

But why did she go the workhouse instead of back to her parents? Were they ashamed of their pregnant daughter? Was it case of ‘never darken our doorstep again?’ Or perhaps there were medical complications and the workhouse infirmary was the only care she could afford. Unless the workhouse kept detailed records that I have not yet found, we may never know.

I was first made aware of the problems around the identity of this son by Frank Wiltshire, a friend in Australia, researching the stories of the men who fought in the First World War from my home village Blackham, in east Sussex

One of the names on the illuminated list of those who served that hangs in Blackham church is T Gasson, Royal Sussex Regiment. Frank’s research showed a complicated story.

And the family all assumed that he was the son of both my great grandparents, just born a little early!

But in the 1911 census he is living with his wife and children a couple of houses away from his parents at the home of bootmaker William Mills. And he gives himself as Thomas Gasson.

And having been discharged from the army as time-served in April 1916, he is obliged to re-enlist and does so as Thomas Gasson.

What on earth was going on? Was he Thomas Marshall’s son? Or had he found out that he wasn’t his child and reverted to his mother’s maiden name?

At some time – I can’t wait for the 1921 census to be released! – he reverted to Coomber and I once met one of his sons who was still Coomber in the 1990s.

I just hope a few more clues come to light.

Meanwhile, I’m trying to find out how long Elizabeth spent in the workhouse and whether it was just for the birth or perhaps longer.

And I wonder if the humiliation of giving birth in the hated workhouse was the reason in later life that she became an unofficial midwife, saving other women the shame of being too poor to call the doctor.

Or maybe that’s a 21st century, romantic interpretation and perhaps she just needed the 2s 6d that women like her usually charged for their services.