Home › My Life › A shove in the right direction

A shove in the right direction

It was only a gentle shove but my mother’s hand in the small of my back was enough to get my five-year-old legs tottering down the path to the door of Blackham School before I could have second thoughts and beg to be excused from entering this strange new world. 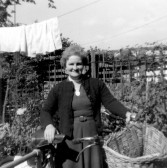 Elsie Coomber wasn’t a hard woman – I can never remember being smacked even though that was commonplace in the late 1940s and 1950s when I was a child – but she was always willing to give a push in the right direction if she believed it would be good for me. The next time I recall feeling the maternal hand in the back was my first visit to the school dentist a few years later. As soon as the nurse said to the dozen or so anxious kids in the waiting room, ‘Who’s first?’ I found myself being eased towards the door marked surgery.

In those days a visit to the dentist was even more traumatic than today, with the never-to-be-forgotten, smelly rubber gas mask put over your mouth and nose until you passed out and then the process of coming to in some pain, with a mouth full of blood, your tongue seeking out the gap where once there had been a tooth. Above all the nausea. Mum knew that seeing other groggy, tearful kids stumble back from that mysterious room on the other side of the door wouldn’t make me feel any better about going in, so I was the first.

At the time, I seem to remember, I wasn’t too thrilled at always being encouraged to be the first to face my fears but now it seems like one of the best of many good things my mother taught me. Not that I was a good student. As I look back over the 65 years since that first day at school, many of the biggest mistakes came when I put off unpleasant experiences only for them to get worse the longer they were left. What an idiot not to learn such a simple lesson, especially as that first shove took me into a place I still look back on as one of the most influential in my life.

By modern standards, I guess Blackham Primary School would not be considered up to scratch. Even back then it didn’t have a great record of pupils ‘passing’ the eleven-plus examination to grammar school but it’s hard to know if that was the school’s fault or the raw material the teachers were working with. Most of the 30 or so kids were, like me, children of farm labourers. Nearly all of their parents had left school aged 14 with barely the basics needed to follow their own parents into labouring jobs, and books were not much in evidence when you entered most homes in the village. 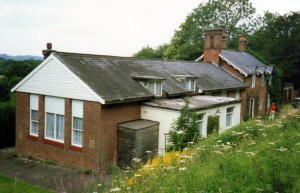 The red-brick school itself was certainly basic. It stood alone, well away from either of the two centres of the village so just getting there every day felt like a long trek along ‘the main road’ with mysterious woods on either side and branches meeting threateningly overhead. Apart from tiny, peg-lined boys’ and girls’ cloakrooms at one end of a central corridor and a small kitchen where the dreaded ‘school dinners’ were produced at the other, the school consisted of two rooms.

To the left was the room where the ‘small’ class of 5-7 year olds learned the basics: pencilling over pale dotted images until we knew how to write our letters, and then adding tails to them so we could join them up; learning, thanks to Janet and John, to read simple words and then moving on to slightly longer ones, speaking out the syllables and then crunching them together into a word we had heard; and setting out our sums neatly in hundreds, tens and units in exercise books with helpfully squared paper and finding out how to carry numbers over from one column to another and, finally, the satisfaction of a tick to denote we had got it right.

That was also the stage when we started to look at all those mysteries printed on the back of our exercise books. Some, like multiplication tables, would soon be familiar. Others, like ounces in a pound, and pounds in a stone took a little longer to grasp. Yards in a mile wasn’t too tricky to understand but acres, poles, perches and roods remained a mystery even to a country kid.

Once we had mastered all those skills, we moved across the corridor to the hall, a much larger room which housed the ‘big’ class until we were ready to go on to secondary education. This room was clearly designed to accommodate two classes but I never once saw the wooden screen dividers pulled across. Despite its size, it was heated only by a single pot-bellied stove on which, in winter, we tried to warm the bottles containing a third of a pint of milk provided free each day to make sure the post-war generation grew strong. At the corridor end of the room there were trestle tables where meals were eaten and occasional lessons taken when we needed room to spread out; at the other were desks equipped with inkwells facing the blackboard. And in the corner, a door into the head teacher’s house which formed the far end of the school.

The smelly Elsan toilets were in a small brick building in a field below the large concrete playground. We didn’t notice that the toilets fell well short of standards acceptable today. For many of us they were more hygienic than the ‘bucket’ lavatories we had at home. Similarly we took it for granted that even though there was an electricity pylon in the next field, the school, like our homes, had no access to electricity. And for me, at least, that lack of power changed my life.

I seem to remember the school day finished at 4 p.m. Anyway, it was certainly late enough that in the winter it was too dark for us to see to work for the last half hour or so before going home. On those occasions the head teacher, Mrs Forbes, would fetch an oil lamp from her house and bring one of her own books to read to us. Sitting in the gloom, I became spellbound by the life that existed in books, especially the world created by Arthur Ransome in the Swallows and Amazons stories. With Mrs Forbes reading a chapter or so a day, we worked our way through pretty well the whole series of adventures.

Until I was nine, I only left the village for the annual charabanc to the seaside, so I never imagined there was a real place with mountains and lakes big enough to sail on and with places like Cormorant Island where children could explore. The biggest stretches of water I knew were three village ponds, one of which was behind the church where we fished. Launch a boat on one of those and you would be on the other side in seconds. Similarly, John, Susan, Able Seaman Titty and ship’s boy Roger were like no-one I knew. Most of us were happy just to have a second-hand bike, let alone spend weeks having adventures in a sailing boat. But I didn’t feel deprived. To me they were invented people doing exciting invented things. That is what books were and I couldn’t get enough. I was in love with stories.

I devoured everything I could get my hands on – books, comics, newspapers. I even used to creep into the houses of other families where I knew the children had different comics, read them and slip out again without saying a word. The wireless provided me with even more stories – Dick Barton was a special favourite. And at school we were given the freedom to write our own tales, most of the boys re-winning the recent war as intrepid airmen shooting down the Hun.

I’m sure there are many people who look back at Blackham School with regret, wondering if a more formalised education in a bigger school might have suited them better, brought out more of their talent. I was just lucky that what that school taught, I needed and wanted to learn. There is one regret: one day Mrs Forbes called us out, one by one, to read out the words on an A4 sheet of paper to make sure we could pronounce them. There must have been about a hundred words and I sailed through all of them, except euphemism. To say I was a little disappointed would be euphemistic.

I still dip into Arthur Ransome from time to time – in my bookselling days I always included Swallows and Amazons when topping up stocks of Puffins and remember with a smile the day a small boy asked for Swallows and Amaze-ons – and looking back on a career that has included bookselling, publishing and journalism, I can trace much of how I got here to the day my mum gave me a shove in the back and said ‘I’ll see you later.’

Tagged with: Arthur Ransome, Blackham, school, Swallows and Amazons
Posted in My Life

One comment on “A shove in the right direction”