Home › Yorkshire › Down to the shade by the river

Down to the shade by the river

And feel the breeze on my face before I die.

And bend me down and kiss the world goodbye.”

As the days seem to accelerate towards my three-score and ten and that damned reality imp at the back of my mind whispers that not everything on my bucket list is going to be achieved – sorry Australia, Himalayas, playing the piano and reading Ulysses – Kris Kristofferson’s defiant but philosophical Kiss the World Goodbye resonates more and more.

‘I’m just a river that rolled forever and never got to the sea’ is earmarked as one of the lyrics to be heard at my funeral. As I’m from a gene pool that has seen many members of my family live well into their 90s, I’m hoping it will be many years before my time is up but when the moment comes I think I’ve found the perfect, shady river for kissing the world goodbye. Or more accurately, the perfect beck.

I first became aware of Lodepit Beck – or as I once heard it called in a moment of delicious historical Chinese whispers, Lord Pitt’s Beck – when I started to make a few tentative walks along the river and canal near home in order to be rid of an unsightly paunch. There’s a delightful – and delightfully short – walk along the side of the River Aire between the rowing club and Dowley Gap and to get to it you cross the beck on a narrow walkway just below Hirst Mill weir.

As my fitness improved, I gradually ventured further from home and started to follow the beck upstream through fields and woods, past huge boulders dumped by nature, stone walls and stiles made by man, under a canopy of towering trees and round fallen trees weathered into shapes that Henry Moore and Barbara Hepworth would have relished.

Every step disturbs a blackbird or a thrush or a pigeon or a magpie or occasionally a heron hoping to get lucky or any of the countless other birds my ignorance prevents me from naming; there are rabbits and squirrels aplenty and I once even startled a deer that bound off before I had time to focus my camera.

At every stage along its course – even when you can’t see it – you can hear the beck as it makes its way through the countryside, rushing over stones, eagerly seeking the quickest path downhill. Each time I make the journey, I grapple with the right word to describe that sound – chuckle, babble, gurgle, chatter? I usually settle on bubble because that also describes what is physically happening.

Over a period of months I’ve worked my way further up, through Eldwick on to the moors and while I’m still some way from arriving at the source – or rather sources because this beck is fed from many directions – I now have some concept of its journey down to the river. It is a path that water has followed for probably millions of years. People waited until the bronze age to arrive and probably later to settle along its bank – Eldwick is from the old Norse Helguic, ‘Helgi’s dairy farm’. Even then, the beck forced them to build over it or round it. It is tempting to think that long after we’ve all gone, the beck will still be running. Chuckling will probably be the right word then.

Let’s follow it down from Graincliffe Reservoir, up near Dick Hudson’s pub. There’s a short run down the hill to Eldwick Reservoir from which a steady flow of water feeds into what is clearly recognisable as a beck – at this point Eldwick Beck. It continues down the hill to where it once provided the power for Eldwick Mill. The corn mill is long gone and the beck has now been incorporated into the well-manicured garden of the cottages that once held mill workers. 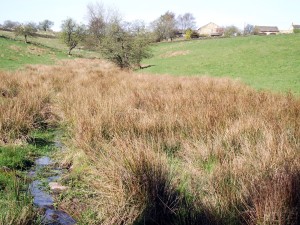 back to backs. Look behind you, up the field towards Tewitt Farm, and the vegetation tells you that another stream, hardly more than trickle most of the time, is making its way to join up with the beck under the garden wall.

From there it runs parallel to the road known as the Green, behind the houses and the Acorn pub before being walled in under Bridge Cottage, under the road and out again through a rustic, three-arched opening before being channelled along Spring Lane. But man only controlled its path for a short while and the beck snakes down below Saltaire Road, darting round houses and under tiny stone bridges, making its way towards Baildon Moor. 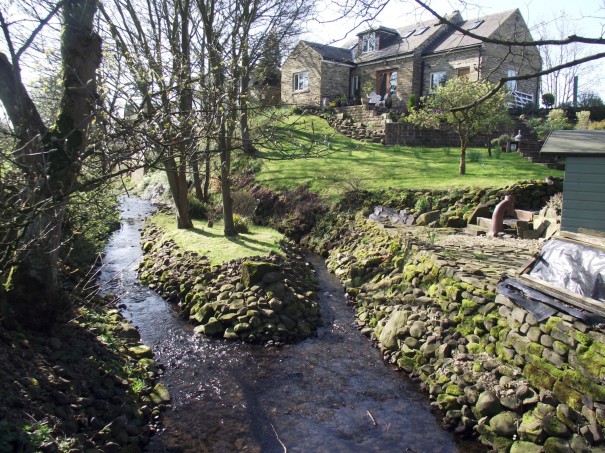 Behind the houses on the Green

At the entrance to the moor it is joined by Glovershaw Beck tumbling down from the hill above and as the two mingle under the bridge and make their way into the wood, it is here that it becomes Lodepit Beck. Its path here is through a deep, heavily wooded valley carved out millions of years ago by ice. I once tried to follow the beck along its course but a lack of suitable footwear forced me to turn back or get soaked; easier to follow it from above on a moor path, occasionally glimpsing a white-water cascade as it leaps over rocks but always aware of the sound. 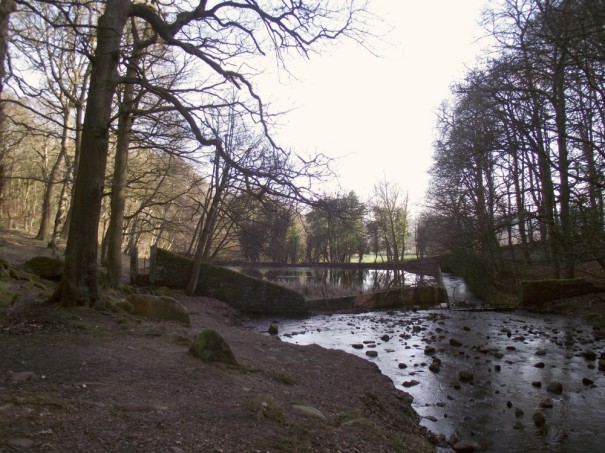 The path eventually dives down through the woods and you pick up the beck once again at one of its most attractive spots, just above the small reservoir built by Sir Titus Salt to ensure he had some control over the flow of the river past his mill. It’s a little gem with by-waters, overflows and intriguing bits of walls that leave you wondering who or what they were meant to keep out – or in. You can only admire the amount of effort that must have gone into building it in this inaccessible piece of hilly woodland with nothing but tracks over which to carry your materials. 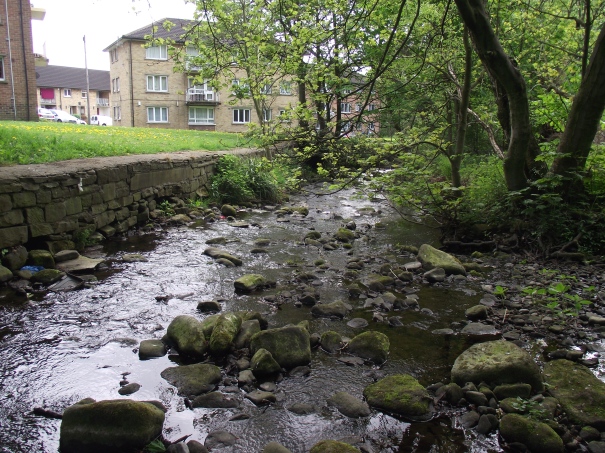 The Beck nears the river

The beck’s journey is almost complete. Released from the reservoir, it skips and leaps through more thick woodland that gets extremely soggy in winter as water pours off the hills to add to the flow below. Then into a stretch of meadowland, under the arched stone bridge at the end of the Coach Road and down past the housing estate to the river where it is immediately swallowed up in the cauldron caused by Hirst Mill weir. There is still a long way to go but unlike the person in the song, this river will eventually reach the sea. However, it is hard to imagine it will pass through a more beautiful setting again.

One comment on “Down to the shade by the river”