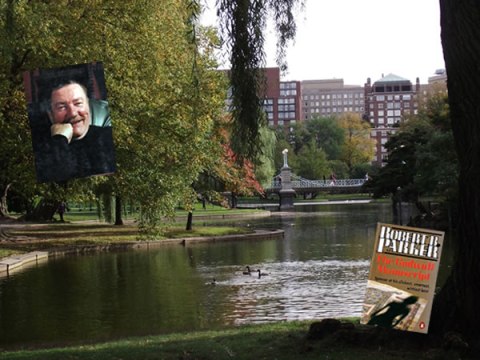 I was something of a book snob at school. If it wasn’t ‘Literature’ (the capital L was important) I wasn’t interested which was a bit strange because I found many of the A-level set books hard work. I still haven’t finished Vanity Fair.

I didn’t deign to read crime novels until I became manager of Ascroft & Daw’s paperback shop in London’s Strand. I was only about a year out of school so ‘manager’ sounds quite impressive until you know I was also the cleaner, the tea maker and responsible for every other job. The company had a chain of shops in the capital, each run by an inexpensive enthusiast like me, answerable to the mother shop in Charing Cross Road. It was like entering a different world. I learned a lot about running a shop, a bit about life, and my reading habits were transformed.

My branch was at the Waterloo Bridge end of the Strand, opposite Bush House and my taste was gradually educated by my regular customers from Australia House, the BBC and one guy who was in the orchestra at Drury Lane and came in at least once a week for something to read in the pit when he wasn’t playing.

It was he who persuaded me to read Raymond Chandler, Dashiell Hammett, Ross Macdonald and a whole series of other ‘hard boiled’ writers and because I was not a complete fool, I was soon hooked.

One of the many perks after I moved to work for Penguin Books and eventually found myself as one of their marketing managers was that Paul Sidey, the editor then in charge of the crime list, would pass on books he was considering for a second opinion. That is how I first got my hands on Robert B Parker’s The Godwulf Manuscript. It only took the first paragraph for me to realise I wasn’t going to bed until I’d finished it.

‘The office of the university president looked like the front parlour of a successful Victorian whorehouse. It was panelled in big squares of dark walnut, with ornately figured maroon drapes at the long windows. There was maroon carpeting and the furniture was black leather with brass studs. The office was much nicer than the classrooms; maybe I should have worn a tie.’

I had met Spenser (with an S like the poet) and soon had that feeling you only get with books you  really like – I wanted to keep reading but didn’t want to reach the end. And Parker, the ultimate pro clearly didn’t believe in stretching a book to 300 pages when he could get the story told and the living earned with 198.

From then on, I consumed his books as they came out. I loved the pace and the wit and the way Parker drove the narrative forward with crackling dialogue. I liked the characters – private-eye Spenser, tough, sardonic, moral; Susan Silverman, his independent-minded shrink girlfriend; teak-hard, quiet, indispensable Hawk. Even the minor characters were real to me – Henry Cimoli, Rita Fiore, Martin Quirk, Frank Belson and a thug like Joe Broz. And never forgetting Pearl, the Wonder Dog.

And as I got to know them, I got to know Boston which was every bit as much a character in the stories as the people so when I planned my first visit to the city in 2011 I decided to walk in Spenser’s footsteps. I read all 39 of them again, in order, and as I did so I made notes about Boston. Then I planned my stay around those snatches of description. It turned out to be the perfect way to discover the city especially as Boston doesn’t sprawl too much and is a great place to walk.

Here’s some of the places Robert Parker introduced me to: 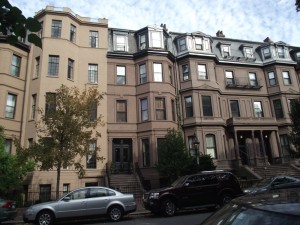 ‘Susan and I held hands as we strolled down Boylston Street towards Arlington…We turned left on Arlington and walked past the Ritz. Across the street in the Public Gardens, Washington sat astride his enormous horse…to our left the mall ran down Commonwealth Avenue…The next block was mine, and we turned down Marlborough Street and into my apartment.’ [Stardust] 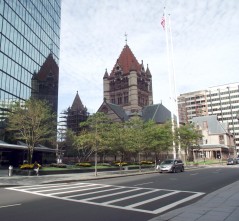 through Copley Square. The fountain in the square was in full spray and college kids and construction workers mingled on the wall around it…Beyond the fountain was the Copley Plaza with two enormous gilded lions flanking the entrance. And at the Clarendon Street end of the square, Trinity Church gleamed, recently sandblasted, its brown stones fresh looking, it’s spires reflecting brightly in the windows of the Hancock Building.’ [Mortal Stakes]

‘I’d been working on a block of hard pine for about six months now, trying to reproduce in wood the bronze statue of an Indian on horseback that stands in front of the Museum of Fine Arts.’ [Godwulf Manuscript]

‘Louisburg Square (scene of Olivia Nelson’s murder) is in the heart of Beacon Hill, connecting Mount Vernon and Pinkney Streets. In the centre of the square is a little plot of grass with a black iron fence around it and statue of Christopher Columbus. Around the square and facing it were a series of three-storey, brick-front town houses….I had walked up the hill from Charles Street, the way Olivia Nelson had on the night she was killed. I stopped at the lower corner of the square where it connected to Mt Vernon. There was nothing remarkable about it.’ [Paper Doll]

‘I drove north out of Boston over the Mystic River Bridge with the top down on my car. On the right was Old Ironsides at berth in the Navy Yard and to the left of the bridge the Bunker Hill Monument. Between them stretch three-decker tenements alternating with modular urban renewal units…Out to the right now was the harbour and the harbour islands and the long curving waterfront. The steeple of the Old North Church poked up among the warehouses and lofts.’ [God Save the Child]

Showdown with Gerry Broz: (he) ‘came across the footbridge over the Swan Boat Pond with the low morning sun shining on his left, making his shadow splash long and peculiar across the railing toward Beacon Street…I stopped near the monumental statue of George Washington and took the Browning out from under my arm.’ [Pastime] 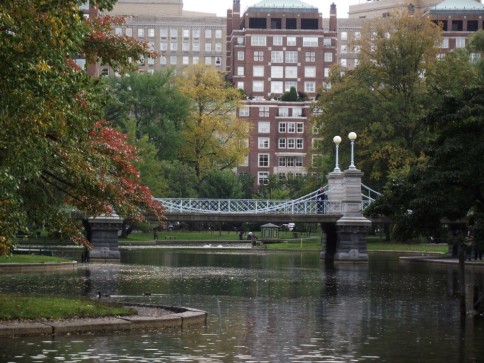 ‘I walked back towards my office (from the Common). In the Public Garden I stopped on the little bridge and leaned on the railing and watched the swan boats move about on the pond and the ducks in solicitous formation cruising after the boats, waiting for peanuts.’  [Valediction] (Sadly I was there too late in the year – the swan boats were packed away for the winter) 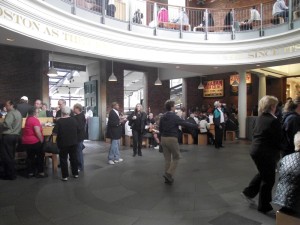 ‘Quincy Market is old and lovingly restored. It is vast and made of granite blocks. Along each side of the long centre aisle there were stalls selling yogurt with fruit topping, kielbasy on a roll with sauerkraut, lobster rolls, submarine sandwiches, French bread, country pate, Greek salad, sweet and sour chicken, baklava, cookies, bagels, oysters, cheese, fresh fruit on a stick, ice cream, cheesecake, barbecued chicken, pizza, doughnuts, cookies, galantine of duck, roast beef sandwiches with chutney on fresh-baked break, bean sprouts, dried peaches, jumbo cashews and other nuts. There are also butchershops, cheese stores, a place that sells custom-ground coffee, fruit stands, and a place that sells Korean ginseng root. Outside on either side are arcades with more stalls and terrace cafes, and in restored brick buildings parallel were clothing stores and speciality shops and restaurants. It claims to be the number-one tourist attraction in Boston and it should be.’ [Looking for Rachel Wallace]

The second office: ‘I had been urban-renewed right out of my office and had to move uptown. My new place was on the second floor of a two-storey round turret that stuck out over the corner of Mass Ave and Boylston Street above a cigar store. The previous tenant had been a fortune teller.’ [Promised Land]

The third office: ‘They’d evicted me, a fortune teller, and a bookie from the corner of Mass Ave and Boylston, moved in with sandblasters and bleached oak and plant hangers, and last I looked appeared to be turning the place into a Marin County whorehouse. I moved down Boylston Street to the corner of Berkeley, second floor. I was half a block from Brooks brothers and right over a bank…To the right across Boylston I could see Bonwit Teller. To the left Police Headquarters…in the window bay of the advertising agency across the street a young black-haired woman in high-waisted gray trousers leaned over a drawing board.’ [Early Autumn]